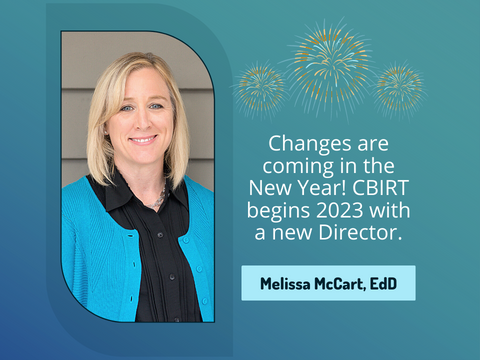 Melissa McCart, EdD, will take over as Director of CBIRT starting January 1.  Dr. McCart began her career at CBIRT in 2011, as the Coordinator of the Oregon TBI Educational Team. For the past year she has shared the director role with Dr. Ann Glang.  Ann retired from the director position after serving in this role since 1994.

Prior to joining CBIRT, Dr. McCart worked with at-risk children and families as a behavior specialist and special education teacher. She spent seven years as a school administrator of a Pre-K to 8th grade school. Currently, Dr. McCart is co-investigator on several CBIRT research projects, and she directs CBIRT’s outreach projects, working with state agencies across the country to implement evidence-based practices with individuals with TBI. We are excited to begin this new phase of CBIRT's work under her leadership!

The Neurocognitive and Behavioral Consequences of TBI in Juvenile Offender Populations

Critical Elements for Return to Learn After Concussion: A Review of the Current Landscape for Students Across Ages